Skip to content
Home
/
CAN THE KINGS BE CROWNED THE NBL 19-20 CHAMPIONS?

12 years in the making and now the kings are back in the Grand final series in an epic way. We all thought at the start of the season, that with the line-up the king put together with combination of the best Big man and reigning MVP Andrew Bogut and sensational Point guard Casper Ware and new coach Wil Wearer the Kings were going to do something special this year, and they have not dis appointed.

With an impressive 20-8 regular season, they made history in becoming the first team in the NBL to lead the competition from round 1 to regular season completion. It did not stop there with a record breaking Game 1 win over the Melbourne United team at the Kingdome, where they came back from 16 points down with 6 minutes to go in the last quarter to end up winning the game was something special in itself. Then only to have game 2 down in Melbourne out do game 1 when Melbourne came out firing and were unstoppable and eventually running away with the game by 45 points. This set up Game 3 back in the Kingdome. It was always going to be an epic game. With Melbourne in foul trouble early and Sydney missing key free throws kept Melbourne in the game and they took the lead into half time. With a tight 3rd quarter neither team could take the upper hand but Melbourne’s foul trouble was starting to hinder them. The 4th came along and the kings stood up consecutive 3 pointers from Didi and Lisch put the kings up and 2 massive plays at both ends from Mr reliable Jae’Sean Tate sealed the win for the Kings and put them into the Grand final. 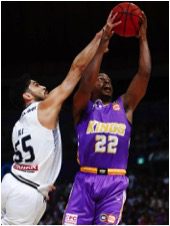 The Sydney Kings will now meet the ever perennial grand finalists Perth wildcats to see who will be crowned NBL 19-20 Champions, with the Wildcats closing out and winning a very close and tough series against the Cairns Taipans last night in Perth.

With a record crowd for the semi-finals of 54,000 people the best of 5 final series is set to be one of the best in the modern era. The Grand final will start in Sydney this Sunday 8th March at Qudos Bank arena in Sydney. So get out there wear your colours and get set for some of the best basketball around.