On a glorious sunny Saturday afternoon in front of a sellout crowd of 4867 fans at the Bega Showground, Parramatta and Penrith have played a 22 all draw in the Sapphire Coast bushfire appeal trial game.

With both teams having their final hit out before the season proper, it was a chance in the first half for both teams to field near round 1 teams in which they both did as the best they could.

Parramatta started off well with some good off loads from the big men including Junior Paulo, but a dropped ball from Blake Ferguson with potentially the line wide open gave the Panthers their chance.

A chance that good friend of the Armchair Champions Nathan Cleary took with both hands and a solo run with a side step wrong footed former teammate Reegan Campbell-Gillard, which led to the Panthers and the games first try. That was then converted by Cleary. 6 nil to the Panthers.

An unforced error from Parramatta when passing across their try line, led to a Maika Sivo knock on. Panthers get the ball and with some quick passing Brian To’o is over in the corner. Conversion unsuccessful Panthers lead 10 nil.

A classic bone rattler from Dean Whare on Dylan Brown served the young Eels play maker some spare ribs for dinner, but luckily Brown was able to soldier on.

It then seemed whatever Nathan Cleary could do Mitchell Moses could do, as a short 20m run break through the line resulted in him scoring a try. Mitchell converted and going into halftime it was 10-6 to the Panthers.

A try to Josh Mansour 6 minutes into the second half extended Penrith’s lead to 16-6 for a few minutes before a spectacular Mitchell Moses chip and chase try in the 50th minute reduced that lead to 16-12 after the try was converted by Moses.

By this stage as it was a trial and both sides made interchanges that gave a lot of the younger players a chance to show their worth in the top grade.

Ray Stone scored adjacent to the posts after a Parramatta kick was fumbled in the in goal by the Panthers and that was converted, which gave the Eels the lead 18-16.

Young Brendan Hands from the Panthers scored a ripper of a try after a long run and a magnificent step on the Eels fullback to score under the posts. It was converted by Jed Cartwright and the Panthers took back the lead 22-18. Most thought this might have been the match winning try but it wasn’t to be as young Sione Fonua scored right on full time to peg back the scores to 22 all which it ended up being after Parramatta’s Jai Field had a chance to win the game with a conversion but missed.

So in the end a 22 all draw which was probably a fair result after the great work both clubs have done in the community this week with school visits, farm visits and community gatherings at the local pubs. All up this trial game in Bega has raised over $4.7 million dollars for the local community with the bush fire relief fund. Great work by both clubs and all involved. 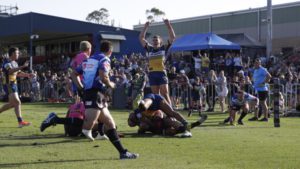