We arrived in Vegas 3 days before the fight and you could already feel the build up, the English fans had started to flood the casinos and the chanting had begun.

The day before the fight was the weigh in at the MGM Grand. We got there early so we could support young Aussie Daniel Lewis who was fighting on the undercard and one of the first to weigh in. Daniel was fighting the giant Mexican American Sebastian Fundora who was 6’5. It was a full house for the weigh in and it had all the makings of a Premier League football match with all the English fans.

To our surprise Tyson Fury is more popular with the Americans than their own Deontay Wilder, when I quizzed a couple of American fight fans as to why they were supporting Fury? They said that Wilder could not relate to the average American and came across as very arrogant. That being said when Tyson Fury entered the arena for the weigh in the place erupted!! The English were chanting ‘There’s only one Tyson Fury’ and the Americans were joining in. The total opposite happened when Deontay Wilder entered the arena, the home crowd heckling the current WBC heavyweight champion.

The pay per view card started at 6pm the next evening and Daniel Lewis was opening up proceedings, we were pretty excited to see an Aussie fight on the undercard of such a big event. Daniel fought a tough fight against a very awkward opponent landing some heavy shots, but unfortunately lost on points.

After a few more undercards it was time for the main event of the evening, the undefeated lineal heavyweight champion versus the undefeated WBC heavyweight champion. You could feel the electricity in the air as both fighters entered the ring. From the opening bell Tyson Fury absolutely dominated Wilder, landing the heavier shots and showing the shortfalls in Wilders boxing skills. Fury floored Wilder in the third and fifth rounds and stunned everyone with his hyper-aggressive approach. Wilders corner eventually throwing in the towel in the seventh round with Tyson Fury becoming a two-time world champion and etching his name into the boxing history books.

It was such an amazing experience to be in the crowd for such a huge heavyweight title fight and the result exceeded all our expectations. Hopefully the third clash delivers for all us fight fans again! 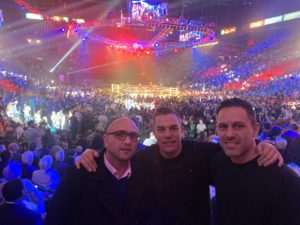