Skip to content
Home
/
Oyster’s Opinions
How great was it seeing the iconic Big V Guernsey running around Marvel Stadium two Fridays ago? Growing up as an Aussie Rules fan in New South Wales was tough, particularly during 1980’s and early 1990’s before the entire state jumped on the 1996 Sydney Swans bandwagon. Anyway, I digress! Whenever you heard the phrase State Of Origin growing up in the mean streets of Seven Hills, people automatically assumed Rugby League’s version of New South Wales versus Queensland. Don’t get me wrong, I loved watching Rugby League too! It would be UnNew South Welshman like not to. There was just something about the ferocity of the hits and the fact that teammates were belting the absolute snot out of each other.
As much as I loved Michael O’Connor slotting that sideline conversion back in 1991, I loved watching Victoria versus South Australia or Western Australia even more! Will the AFL ever bring back the State Of Origin games on a more regular basis? We’ve had two games since 1999 where it was Victoria versus the rest of the country. Sure, it was great watching these games but it’s not the same thing as it was in the glory days of the 1980’s and early 1990’s.
Mr Gillon McLachlan, I have the solution you need to not only bring back the State Of Origin concept but make it a viable and revenue raising option. Now hear me out here,  we’d need to shorten the regular season to a 17 round competition where you play everyone once. Victorian teams will only have to travel once to the other states to play their opposition. For example, Geelong will play either the Swans or GWS in Sydney not both. The Giants will play either the Dockers or Eagles in Perth not both etc. The draw will be created over a two year cycle to ensure that everyone plays everyone both home and away during that time frame. If you have nine home games in Year A, you have eight home games in Year B. I understand that the Victorian teams will have a slight advantage here but it will cut down on unnecessary travelling to play games interstate. There will still be the Western Derby, Showdown, Q Clash and Battle of the Bridge local derbies each season. Now, it’s an annual rather than a biannual fixture. Imagine having bragging rights for the entire season?! Most importantly, Richmond won’t get home and away games for the entire season at the MCG. They will play four times interstate, as will every other Victorian team. 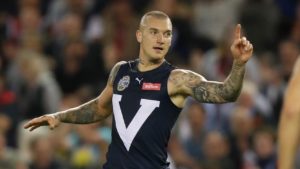 With the new Oyster fixture system in place, this means that I’ve freed up six to seven weeks in the 2020 season which can be used for a representative period in the middle of the season much like the NRL do so well. If we had four teams playing in a round robin style fixture, the players get to represent their home states, the fans get to watch the best of the best play in the same team and the AFL makes a stack of money. Victoria, South Australia, Western Australia and an Allies team consisting of New South Wales, Northern Territory, Queensland,Tasmania over overseas born players would go head to head over a 6 week period. Just imagine a Victorian midfield of Dustin Martin, Patrick Dangerfield and Marcus Bontempelli versus Western Australia’s midfield consisting of Patrick Cripps, Nate Fyfe and Stephen Congnilio. Or how about the Allies forward line of Tom Hawkins, Jack Riewoldt and Taylor Walker duelling against South Australia’s backline of Shannon Hurn, Phil Davis and Rory Laird. The possible match ups are exciting for any footy fan.
The A.F.L is the greatest football code in Australia. The only thing that will make it even better is incorporating a representative period where players get a chance to play in their home state. The N.R.L’s showcase is their State of Origin series. I would even suggest it’s better than their grand final for intensity and passion.
Gillion, be that A.F.L CEO to make the changes that the fans and the players want. Do it… Do it!
Until next time, make sure you’re spoiling from behind and always play in front!
Oyster #77
Seven Hills Bombers AFC Under 9’s Runner Up Best and Fairest Winner 1988. Nor-West Jets AFC First Grade Coaches Award Winner 2009. 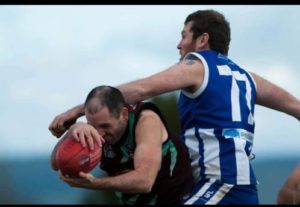